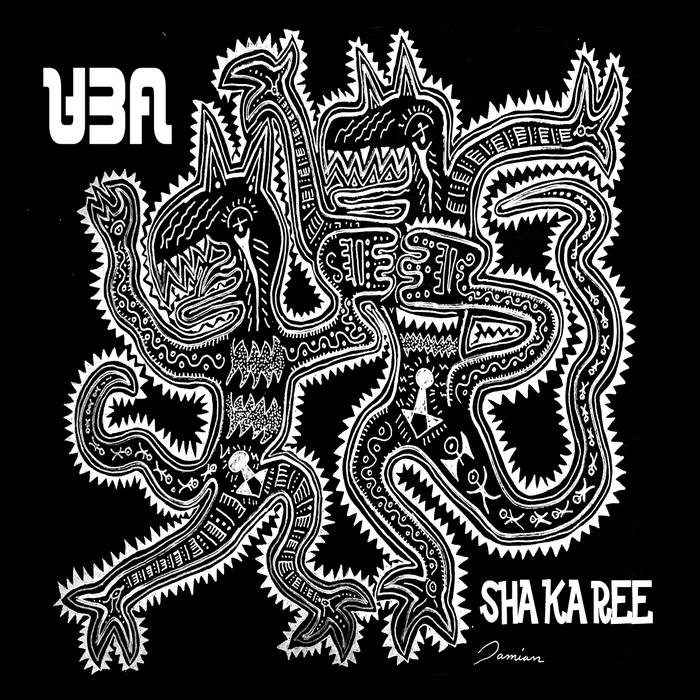 Describing themselves as “Techno-Prog”, UBA’s unique take on techno is upbeat, yet complex; droning, yet dramatic; dark, but full of light and energy. That unique musical style is showcased on their new album, SHA KA REE.

The recordings on SHA KA REE are live. No overdubbing or midi-sync was involved. The clutter of raw beat matching has been left intact to maintain the feel of UBA’s live performances.

Cover art by Damian Downer NY, NY. Back cover by Benjamin Jenkins based on a photo by Raphael Umshied.

UBA (pronounced Ooo Bah) is the electro mind-meld of Mickey Delp (Delptronics) and Ricardo Acevedo (Lost Cat Magnet). This union creates music that throbs of the raw early electronica of Chris and Cosy, Suicide, while blurring the art edge with the cinematic vision of the likes of Tangerine Dream, Brian Eno, and Coil.

Mickey Delp has been designing drum machines, synthesizer modules, and sequencers, in addition to playing electronic music for the last seven years. He performs primarily with hand-built instruments. Mickey draws musical inspiration from Jean Michel Jarre, Tangerine Dream, and Kraftwerk. He performs solo as Delptronics, and in Null Hypothesis, Ouiness, and UBA.

UBA is looking for what’s next. New sounds, new gigs, new adventures… What ya got?


Heterodox Records is a publisher and advocate of electronic music that has it's own color and theme. We look for artists that push the boundaries of their own concepts of art and offer the listener something different. Our goal is to promote, encourage, and display music and art of an abstract and personal nature. ... more

Bandcamp Daily  your guide to the world of Bandcamp